15th to 23rd May 2004 Observations from Nature Diary and Notebooks

15th to 20th [and the 23rd] May 2004
Observations at La Forge and an Orchid Walk organised by the Patrimoine.
[The middle bit was spent at the meeting of 2CV friends at Bessais le Fromental in the Berry
but we returned early as the people in the caravan next door had a generator running all night!!
And it was on our tent's side of their caravan... made it worse. Was tempted to use some sugar in the tank... but lethargy prevailed.]

At La Forge....
Stone Curlews nesting in field oppposite house [Richard had planted tournesol]
We had our meadow cut and the Montague's Harrier came in to hunt as the hay was being turned.

On the 20th we went on an Orchid Walk...
very well organised [and the first Natural History event we'd come across for 'les adultes']
Went in our own transport in a convoy, first to the top of the hill outside GP on the Barrou road.
At the junction of the road leading down to the 'independant' commune of [name] we saw six species including Purple Limodore and Man Orchid. 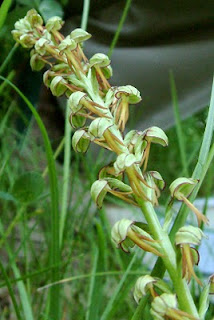 Our guide and lecturer pointed out the 'odd' orchids [crosses between species]... very interseting and informative.
Then via someone's 'private' road down to the road from Etableau to Chaumassay and the Lady and Bee orchids along there at the side of the railway.

At Chaumassay we looked at the huge colony of Lizard orchid above the Source and then followed the railway towards Les Haute Thurinieres.
The whole track and road side was covered in different species in quantity...
20 metres of embankment covered in Monkey Orchid. Also Man, Lady, Bee, Spider in quantity.

Leaving our transports at the roadside we walked through some private woods to see Green-winged, Narrow-leaved and Pyramid [as well as wild Aqueligia]
Returning to the transport we carried on along the railway line to the Boussay road and turned back toward Chaumassay.

Just passed the other [more well known?] La Forge we drove up a track to look at the chalky Juniper wasteland in search of Fly orchid [found some, but they were immature] and the descended the hillside above La Forge, back towards the road... great examples of Pyramid and some Burnt Orchid. 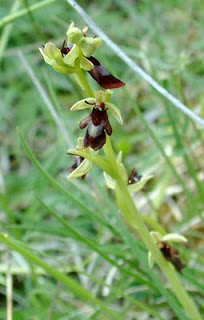 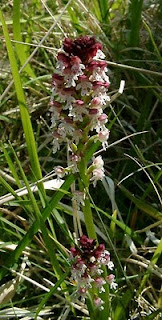 
Most species seen were a first for us. We've been back along that route many a time... it still thrills!
Posted by Tim

Email ThisBlogThis!Share to TwitterShare to FacebookShare to Pinterest
Labels: 2004, La Forge, May, Orchids