They did come back around coffee time today....
and I got some pictures that I shall share here [with descriptions after the photo.]
Click on all the photos to view them full size... they will open into a separate window.

There were about eight groups of Lapwings visible as one looked down the valley....
and ten or so groups of Golden Plover...
but they didn't join up as I watched...
which makes me think that last night's huge flock was a roosting gathering...
so following my update for today in the previous post....
they must have been away when there was barely enough light to see by.

This was the nearest grouping to me.... just over the lake.
There were more flights in the distance.
It is difficult to judge the size of the flocks when they are wheeling around so much....
but they can be counted from photographs...
but it is tedious and numbingly boring... but we may well have underestimated yesterdays flock...
in the middle view, the bottom group has a 'tongue' that projects towards the tree... it is about one sixth of the total... I counted it and there were at least 120 birds [before the group double in depth] which makes that group around 700 birds... and then there are the other two bunches above.
The flock we saw yesterday was bigger and denser... so may well have included the groups further down the valley. 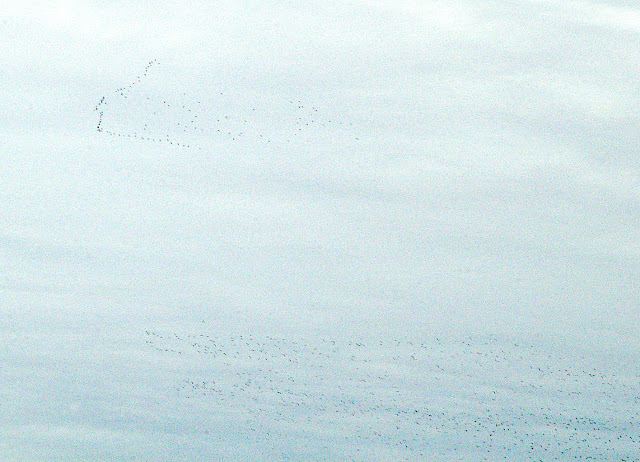 The loose "W",  with some stragglers behind, in this picture are the Golden Plover.... it is one of the patterns to look for. The other pattern is a crescent shaped flock.
The birds at the bottom right of the picture are part of the main Lapwing flock. 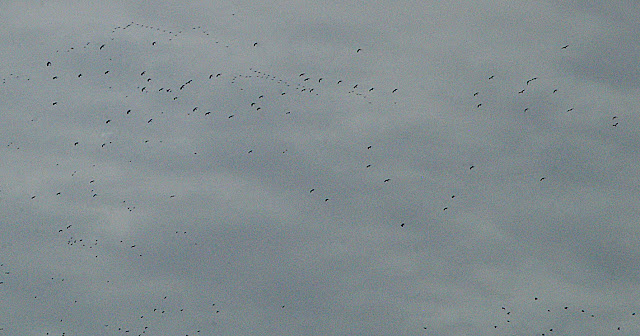 Here is another flight of Golden Plover above some of the Lapwings... if you click on it to see it full size you will be able to see the difference in shape between the species. The "W" at the top is very clear in this image. 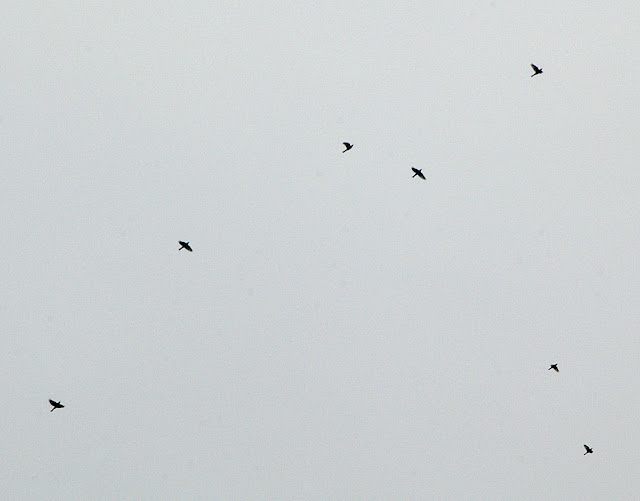 But these aren't either of above species... they are thrushes....
probably Fieldfares [the large ones]... and Redwings [the smaller]....
the wingshape and body outline tell me that... and knowledge of those species behaviour at this time of the year tell me the rest. No need to see colour sometimes.
Both species migrate into the region for the winter and are often in association with each other.
They are often seen around the local orchards.... feeding on the apples that were too small to pick and have been left on the tree.
Posted by Tim


This is my first time visiting your website, but I found a lot of interesting information.

Tim
I just love your shots of the flocks of Lapwings/Golden Plovers. This is what birding is all about...watching common species and studying their behaviour....too many birders and "twit"chers overlook this exciting element of our passion.
Much respect to you Tim for your excellent observations and blog.