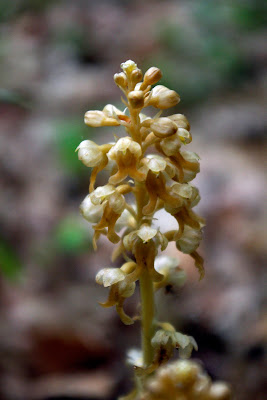 20th
Saw a pair of Black Kites near Chambon... later, saw a pair of Red Kites at Perrusson!!

27th
Nightjar calling [over meadow? Going on volume of sound... I was not going to dance around on our bridge with a pair of handkerchiefs though!]

29th
6.30am Opened door to let out a moth and get a morning breath of fresh air.... saw a Red Squirrel bounding across to the lime tree. First we've actually seen here although we've picked up the evidence of well harvested spruce cone cores often enough.
Posted by Tim

Email ThisBlogThis!Share to TwitterShare to FacebookShare to Pinterest
Labels: 2009, Birds-nest Orchid, May