More about the Crossbills

As promised here is a bit more about the Crossbills [Loxia curvirostra].
We were sitting in the garden when a 'thump' came from the direction of one of our big spruce trees.
We had noticed green, immature cones lying around the tree base and had thought that it was the equivalent of a fruit tree's June drop.
Then we heard another one fall and I glanced upward to look at the tree and saw a red flash as a bird moved.
My first though was woodpecker, but then the bird came more into view and it was red all over.
I went and got the binos at first and then the big 'scope. The first picture is of the male Crossbill wrecking the spruce tree! Not a good shot, but the best I could get... I was handholding the camera
against the eyepiece of the telescope. [The adaptor was indoors and I thought they'd fly.... in fact they stayed an
hour!!] 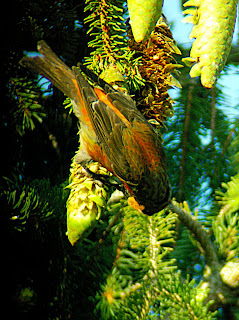 The crossbill feeds upside down, starting at the base of the cone and moving towards the tip. It works very systematically... down one strip, back to the top, down the next and so on. Sometimes it just levered the scale upwards... on other occasions it ripped the scale off the cone and spat it out.
The next pictures show the damaged cones.
The damage done! This was the sight at the top of the tree. 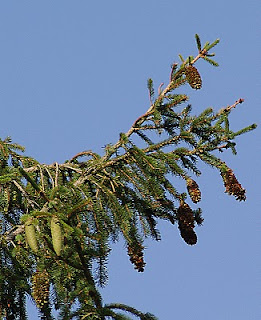 I collected up some of the fallen cones to take close up photographs.
You can see in these cones the way the feeder rips the scale up and out to get at the seed beneath. 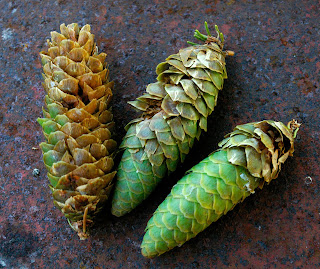 And the final picture is of the top end of the middle cone in the above.
The little split with a hole at the end is the damage caused by the beak 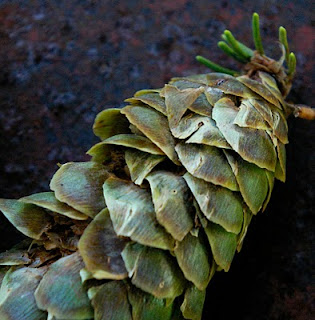 We had a party of three feeding together... the male that is shown above, a female [very different... mainly green... a shade close to the cones themselves] who we only caught glimpses of and a young / immature male who was far more orange than red.
They tended to move around the tree in a parroty sort of way... lots of leaping from branch to branch and walking sideways along the branches... very interesting to watch.

There is also a side angle to this damage... as mentioned in the previous post, we have had an increasing number of small birds feeding inside the damaged parts of the cones. These include juvenile Blue and Great Tits, Black Redstarts, Melodious Warbler, our resident Blackcaps and also non-insectivorous species like Chaffinch and Sparrow
Posted by Tim