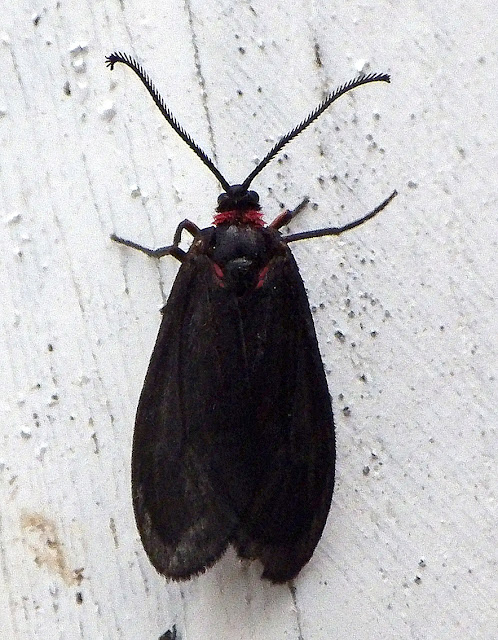 
A chorister for Boxing Day... albeit dressed in black with a red ruff...
all these pictures are of the same small moth... we've only seen it the once!!
[Early July 2014]
It is a woodland species and may well have arrived by accident?

This little moth, another footman, is the Red-necked Footman [Atolmis rubricollis] la Veuve, and is normally found in the forested regions of Europe and Northern Asia during the summer.
We do have large woods very close to us, though, and the amount of woodland on our patch is increasing year on year.

The caterpillars are found on Oak and Beech trees.. and feed on lichens...
here, they are equally likely to be found on Hornbeam... or probably any other broadleaf tree with tasty lichens!

From Wiki... [with reservations in red]:
The red-necked footman is a small moth that is mostly charcoal grey or deep dark brown (fresh specimens almost black), but has a conspicuous orange thorax, part of which is visible behind the black head as an orange-red collar. [I haven't found ONE picture that shows this... they all show a black thorax with a red or orange collar] The hindwings are a brownish-grey colour. The antennae and legs are black and the end of the abdomen is yellowish-orange or golden yellow. The wings are tightly folded together around the body and have pleated, squared-off ends.[again I haven't found ONE picture that shows this] The wingspan is 25 to 35 mm (1.0 to 1.4 in) and the length of the forewings is 15 to 18 mm (0.6 to 0.7 in).

The white eggs of the red-necked footman are laid in small groups in crevices in the branches of trees, especially those of old firs.[not according to all the other references]. They grow to a length of about 27 mm (1.1 in). Their head is black with a bold diagonal white stripe on either side. Their main colour is dark greenish-grey marbled with cream. Each segment bears six tiny reddish yellow warts which bear black hairs. [in fact, they are so lichen-like, that in one photograph on lepidoptera.eu... the caterpillar mid picture is almost invisible!] The caterpillars feed on lichens growing on the trunks and branches of trees, and can be found between August and October. They pupate before winter sets in and overwinter as glossy brownish red pupae, in a loose cocoon buried among moss and leaf litter. The moths fly between May and July depending on their location. They are mostly nocturnal, being attracted to lights, but also sometimes fly by day. Sometimes the moths feed at Scabious and other flowers in the sunshine, but usually rest in day-time on the long branches of firs [read trees] overhanging paths in woods, where they maybe obtained by beating.
The red-necked footman is found in Europe South to the Mediterranean and East across the Palearctic to temperate Asia, including Siberia as far east as the Amur River and China. It is found in parts of Ireland, and in the United Kingdom is present in the south-westerly counties of England and Wales. Records from other parts of the United Kingdom probably represent accidentals and not breeding populations. It is a woodland species found in deciduous and coniferous woodland, especially on spruce trees, but also on pine, oak and beech. It likes to be near streams in cool wooded valleys in upland regions.

For interest... on the German site, a Red-necked Footman is pictured mating with an Orange Footman [Eilema sorocula]... whether or not anything came of this relationship in 2015 we are not told????

A primarily woodland species, which is distributed locally in the south and west of England and Wales, and parts of Ireland. Occasional records from elsewhere [in the UK] are considered to be probable migrants.

The single generation flies in June and July, when it can sometimes be found flying in the daytime. It is also nocturnal, coming to light.

Feeding on lichens and algae growing on tree-trunks, the larvae live in autumn, and the species overwinters as a pupa.

Next Monday... The Orange Footman....

UK Moths This is quite a simple site... but nicely put together...
and if you wait for them to come up... UK distribution maps

The German site Lepiforum.de - For really good samples of photos...
including museum specimens: to use....
Enter the Latin name and then select the Latin name from the list of pages found.
There is probably a lot more on this site... but I don't read [or speak] German!!

The fist photo is particularly good....interesting little "feelers" it
has on its antennae. I'm sure there is a more scientific term.

Good morning Sheila....
This is a male moth...
each "flap" on the antennae is, essentially...
a nose... most moth males have feathered antennae to pick up the smell of the females.
Both sexes release pheromones... how the females pick up the scent of the males, I am not certain! Moth biology is all new to me... but the pheromones and male antennae I know of old.
If you see a male moth with its tail raised... and sometimes vibrating its wings.... it is releasing pheromones from the brushlike tip to the tail.