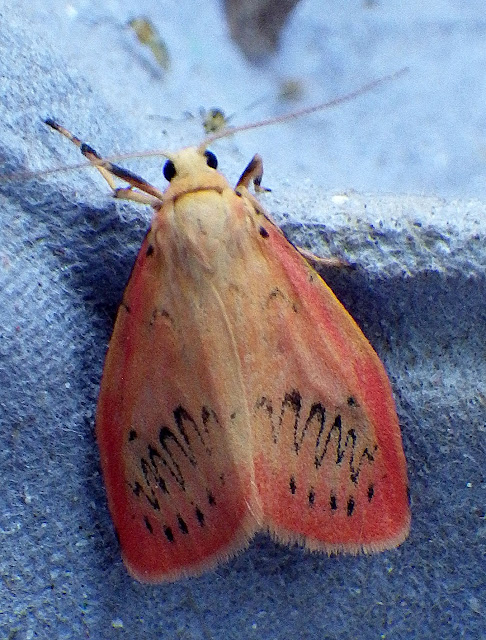 Perhaps the prettiest of the Footmen is...
The Rosy Footman [Miltochrista miniata] la Rosette

They are a very distinctive moth....
pale flesh- yellow forewings with a rosy pink blush towards the outer edge
with a black squiggly line... like a sine wave... with black oval dots towards the hind edge.
There is also an angled black line at the thorax end of the forewing....
and pale yellow hindwings with a yellow to grey abdomen.
It is Footman sized, but holds its wings more like the Tiger Moths.

The caterpillars are still known as woolly bears, but look more like a shoe polishing brush, certainly not woolly!!
"lepiforum.de" has good pictures....
this one and this one in particular show the shoebrush.

The Rosy Footman is a moth of the family Arctiidae. It is found in the temperate parts of the Palearctic ecozone Europe, through to Japan, but may be replaced by Miltochrista rosaria in the East Palearctic. (Looks the same in pattern.... but is yellow)

The wingspan is 23–27 mm.
Flesh-coloured ground colour, rose-red margin to the forewing, and on this wing a black dentate line beyond the middle, and black, elongate spots before the margin. In the male the costa is curved upwards beyond the apex of the cell.
((In ab. rosaria (now full species Miltochrista rosaria), which is commoner in the east of the area of distribution than in the west, and is perhaps a distinct species, the ground colour is more yellow; and in ab. crogea the wings are quite pale yellow, the forewing being edged with bright yellow.))

The moth flies from June to September depending on the location
[July and August in the UK].
Often occurs singly, in broadleaf and mixed forests, on moors, at road-side ditches, on umbellifers or scabious.

Egg oval, yellow. Larva grey, with brownish head, with long and dense hairs, hibernating, until June on lichens on walls and fences. The caterpillars feed on lichen. Pupa black-brown, abdomen with yellow incisions, in a cocoon densely intermixed with hairs.

Next Monday... Another less ordinary footman....

UK Moths This is quite a simple site... but nicely put together.

The German site Lepiforum.de - For really good samples of photos...
including museum specimens: to use....
Enter the Latin name and then select the Latin name from the list of pages found.
There is probably a lot more on this site... but I don't read [or speak] German!!

Yes...and tiny...just over a centimetre long and around eight millimetres across.
Just wait until I get to the micro-moths....