The orchids locally are fabulous this year but some are missing / poor show [possibly down to not being able to build reserves in last years terrible weather?] Maize sown opposite 9th/10th  - lots of machine activity since. Often exceptionally quiet at night.

10th
Again Corncrake call from over road - more than three times on this occasion [about five minutes in all] Sounded from almost due south [right hand end of wood] This is in line with the 'waste' area near Etableau. Heard nightjar  also over our meadow.

13th & 14th
2 pairs of Red-legged Partridge regularly in field opposite - feel like offering the males a 'jump-start' as they always seem to sound like a car/bike having difficulty getting going.

15th
Using the 'Birds of the Western Palearctic' DVDs from Birdguides we've at last managed to identify the odd wader-like call we've been hearing on a number of visits - it is the 'night' display of the Stone Curlew - again usually to the right of directly opposite which would put it over towards Etableau again. [Near to where we saw a pair on the walk of 15/5/05]

16th
While our prairie was being mowed, Montague's Harrier [♂] came down and quartered the cut area, unafraid of the machine. Three Hares in the maize field today. Saw Cuckoo flying over. Weather terrible.

17th
Weather much better. Good orage  [storm] late PM. Montagues [male and later female] present all day. Also a pair of Hobby came over. Saw male Monty do a food pass to the female. Lots of activity now the grass in the meadow is short!! Poor voles but that's life [or death?]. Late PM, just as it was getting dark picked up a pair of Stone Curlews at ditch on the right hand side of the maize field.  [gathering power of the Kowa's 70mm objective is very good late evening and in other poor light situations]. Also saw a deer [too big to be a Roe - book say Sika!] going across top of field and into the wood.

18th
Stone Curlew pair with chick. Toddled over to its parent and snuggled under wing. Later: Snipe drumming from direction of road bridge. Noticed Tassle Hyacinth [Muscari canosum] on far bank of bief next to the tree nursery area.

The noise was incredible. They flew straight overhead and I almost fell over backwards [Falklands Penguin Syndrome!] as I took the following shot ... I was saved from total embarassment by the trunk of a willow! 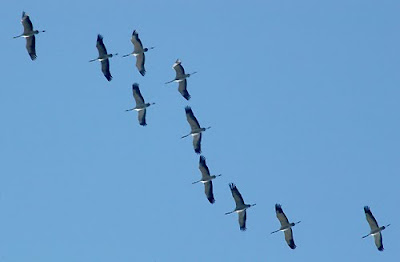 14th
Stag Beetle [♂] crossing road - stopped and photographed it on the bonnet of our '56 2CV.  Put it on the side of the road it was aiming for.... it promptly turned back towards the middle of the road. Turned it round in my hand a few times , put it down again facing its original direction of travel... this time it did head off into the vegetation.
[Bois Bonhomme map 1925E GPS 3394-51962] 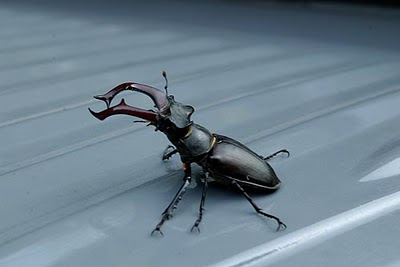 16th
Out in rain to Etangs Perriére & Neuf [Voir les Oiseaux in Touraine - Walk 23 Bossay-sur-Claise] Rain had got heavier so didn't stop. Turned left on D50 and stopped beside Etang Bourreau where we were able to pull off the road beside the water. Saw juvenile Great-crested Grebe and Coypu [ragondin] first. Then two Black-necked Grebe juveniles appeared.... no adults to be seen. Nice view of a Kingfisher right beside the car and then over to bushes on the right... where it stopped momentarily before diving into the water behind some rushes... it didn't return to the same perch though [must have known I'd got the camera out!!] Also Coot and juvenile Moorhen around. Grey Heron flew off as we arrived [GPS 3485 - 51824]

Later this trip we did get to the Etang Perriére where we saw Black-knecked Grebe, Whiskered Tern, Black Tern, Purple Heron, Shoveller and Pochard before Pauline twisted her ankle in a hidden rut! 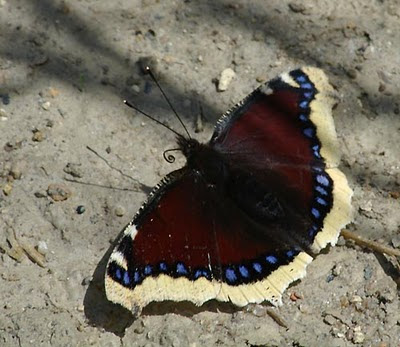 But all was not lost, as we slowly made our way back towards the car, we came across a Camberwell Beauty drinking from the remnants of a puddle left by the rains. 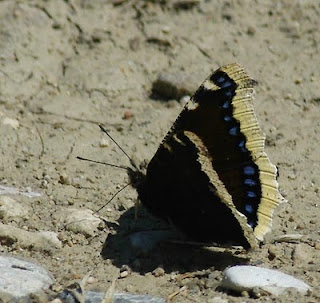 Also discovered that our Black Redstarts had chosen to nest INSIDE the Laiterie [as per normal....] but it now had been fitted with double glazed windows and doors.... and yes, the young fledged successfully... and again in 2008 when they chose the bedroom upstairs! This is the 2007 nest in the hole left by the removal of the old manger.
By 2008 the doors were in place upstairs... we have yet to clean the guano from the surfaces. 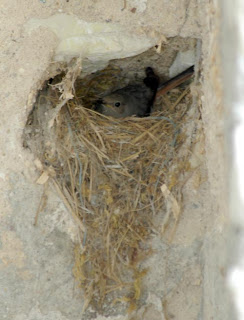