What stimulates an interest in Nature?

My first memorable moment was when I was four or five and my parents caught someones pet Jackdaw and shut it in the coal shed so that the owner could collect it.

I was fascinated by this bird and, when the man came to retrieve his bird, he placed it on my shoulder... so for a few minutes I was eye to steely blue eye with a tame Jackdaw. I've had a very soft spot for these smart and intelligent beasts ever since. That was '54 or '55.

Then there were the books that I was allowed to look at once I could read properly. Among these were my father's old schoolday "Rambler" books...

... with easy script and attractive pictures.... but informative. Then I was bought volumes 2 & 3 of the Nature Field Series by H. Trevor Jones, a Warnes series published in 1952, and full of reasonably accurate but heavily precised information.... with pictures of some of the creatures, but not all.... and missing, amongst others, the Kestrel in volume 2 "Birds and Wild Animals".
Volume 3, my other copy was "Insects and Spiders". 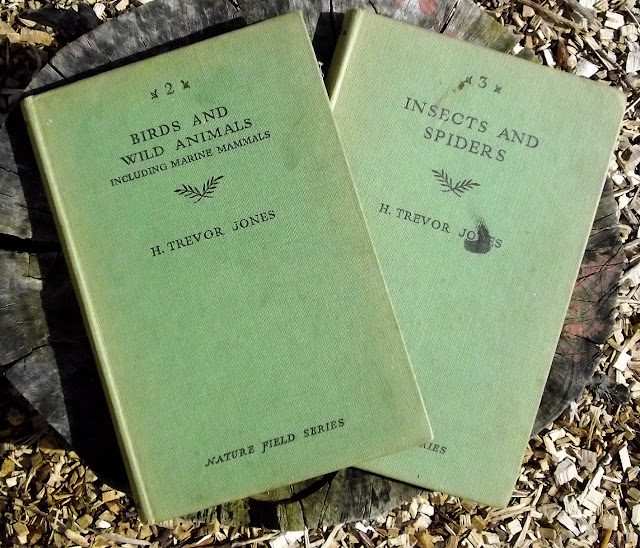 There followed copies from, perhaps, the most famous Warnes series of books... The Observer's Series...I had the Book of Insects, [also as a set of cards in a folder.... which might actually be in a box in the barn, somewhere], then the Book of Wild Flowers and the Book of Birds.... and then there was the I-Spy Series.... all stimulating....especially the latter with challenges to go and find, rather than being solely an identification aid.

When I visited my Grandfather's house, he had a series of six nature books from the turn of the 20th Century.... these are now mine. The have informative articles on different aspects of Natural History.... and a 'fold-out' dissection in the front of each book!! These were opened carefully for me to look at.... NOT TOUCH! Which is why they are in such good condition now. My father's "Spring" Rambler book has had the black & white line drawings "coloured" by someone using wax crayons.... most probably me!! [Not too badly most of them... but the Larch is a right mess!!]

Perhaps though the nail in the coffin.... or should that be the icing on the cake, was the boxed copy of Fabre's Book of Insects.
Fabre's writing and observation, carefully translated into English along with some beautiful illustrations, has kept my interest alive throughout the intervening years.... I dip in and out as the mood takes me.

I was fortunate enough to spot a small biography of Fabre on a stall at the Fête de la Confiture at Abilly in 2011.... this now lives in the box as well!


Then I was bought a membership of the RSPB.... the badge that came with it I still possess and wear.... and my first equipment.... an old pair of opera glasses [magnification x3] and a large lens of around x4 that folded inside a leather case; these in a shoulder bag that had room for a book. No pencil, no notepad.... no one encouraged me to take notes or make sketches.... rather, I was encouraged to remember and describe. But describe "without using the hands".... perhaps paper was expensive in the late 50's... perhaps it was just Dad's way?

But, hey! The sun is shining at last and there is a Kestrel hovering over our potager.... now, where are my "macronoculars"?
Posted by Tim 4 comments:

Proserpina in the underworld

Yesterday I was harvesting shallots in the potager when a creature surged out of the freshly-broken ground in front of me. My first thought was that I had disturbed some kind of snake, with a pointed snout and a grey, apparently scaly, back. Any small predator such as a weasel would back off immediately when confronted by this display. Then the tail emerged revealing the animal to be a chubby critter just over two inches long, rather short for a snake, although at full stretch in "attack" mode it was a good three inches! Tim came over hastily from mowing and pronounced it to be a hawkmoth caterpillar, but not one he recognised. It has a single eye spot in the middle of its tail, tiny spots of blue and red in black rings on its sides, and lacks a tail spike.

Consultation of the "oracle" (Michael Chinery) identified it as proserpinus proserpina, a species lacking an English common name but whose French name, Sphinx de l'épilobe, translates as the willowherb hawk moth. It also feeds on evening primrose and purple loosestrife, and has been identified as a pollinator of the greater butterfly orchid, platanthera chlorantha. The INPN web site informs us that this is a regulated species on the Red List of insect species for France. The Inventaire National du Patrimoine Naturel only has three records for Indre-et-Loire. Since its home had already been destroyed by accident, we placed it on a molehill in the meadow by some willowherb plants in the hope that it will be able to bury itself again if it so prefers, with its food species nearby but out of reach of large bipeds with gardening forks.

The scientific name, considering that the caterpillar came out from under the ground, is interesting in itself. Proserpina (Persephone in Greek myth) was the daughter of the Roman goddess Ceres (the Greek Demeter), who was the Earth Mother and "the protectrice of agriculture, and of all the fruits of the earth". Proserpina was sleeping in a flowery meadow when Hades, the god of the underworld, saw her, fell madly in love and carried her off. Ceres pined for her and winter came into the world. Proserpina pined for her mother and her flowers, and generally made life hell for Hades. Eventually husband and mother came to an agreement: Proserpina would spend six months of the year with Hades and six months with Ceres. Winter ended, spring came and the cycle of the seasons began.

Who's lookin' at you? 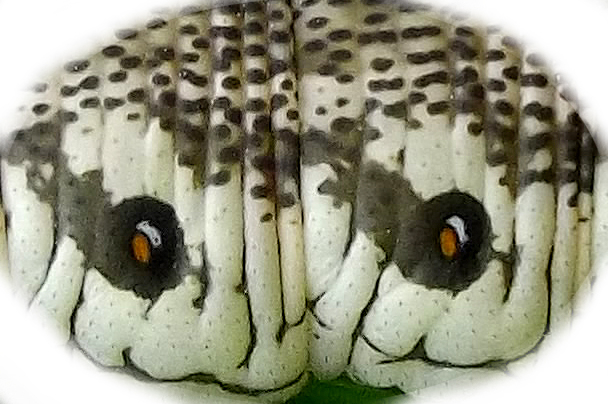 Who does this pair of eyes belong to.... a blog follows tomorrow.
And Susan or Elizabeth, if either of you know , please answer cryptically....
Posted by Tim 3 comments: