NUTS to that Woodpecker!! [or 'The law of unintended symbiosis'.]

We've lost some of our hazelnuts.
To the juvenile Greater-Spotted woodpecker [and he'll become a Greater-Splatted if I lay hands on him!] we've seen around... or to the Nuthatch we've heard.
Seriously though, the method seems to be as follows...
Rip a bunch of nuts from bush and drops down onto the concrete base rail of the fence.
Use this as an anvil....

but [and this is where the "symbiosis" aspect comes in] he doesn't get much of a meal, as the noissettes are still very unripe and absolutely tiny.
[And they'll probably stay small unless we get some rain.]
So he leaves them where they are.... and our little rodents come along and find that someone has supplied some nuts for them.

This is all purely conjecture as I haven't seen the woodpecker or nuthatch at work... I am going on the evidence.
Posted by Tim No comments:

I've spent a few evenings, after working on the house, bug-hunting in the meadow... which I have now named Argiopea!
You will see from these pictures that the magnificent orb-web spider Argiope bruennichi is present.... actually very present... two per square metre, often more.
The ones photographed here didn't have the loveley zig-zags [stabilimentum] above and below the centre that make the webs so easily identified... but I saw a great one 29th July - but didn't have the camera with me... I'll go hunting again tomorrow if this weather holds!
If I finish writing this before I've captured the classic web pic, I'll put it up later.
The first picture shows the yellow, black and white stripes clearly 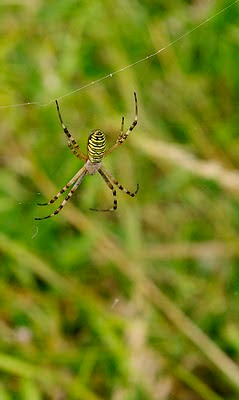 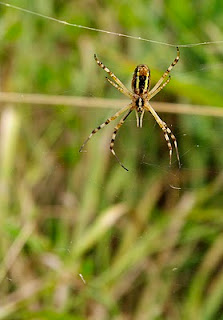 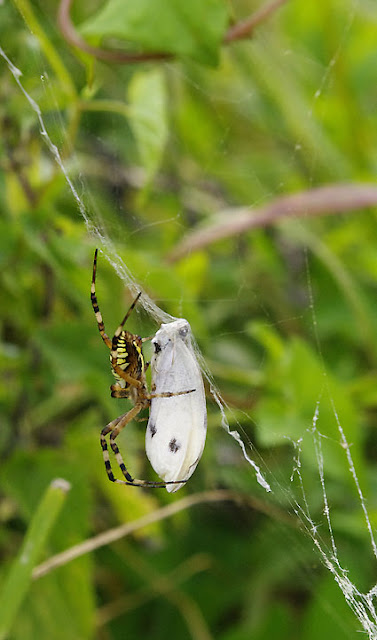 Other insects seen on the 'bug-hunt' were numerous Damselflies including a probable White-legged Damselfly [Platycnemis penepipes], zillions of grasshoppers and bush-crickets, grass moths, mantis nymphs, other spiders, including Araniella cucurbitina [shown here trying to subdue a Green Lacewing - Chrysopa 7-punctata] and bugs, including Graphosoma italicum with its gaudy red and black design. 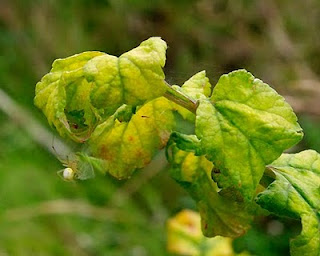 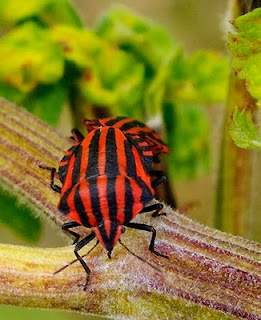 The 'Butterfly Bush' [also called the same in France - "L'arbre des pappilons"] has had its fair share of visitors too!
Around lunchtime, just as the sun hits the Buddleia full on, we get the Broad-bordered Bee Hawkmoths [Hemaris fuciformis] visiting... and then a steady stream of species from then on, until the sun has moved from the flowers. 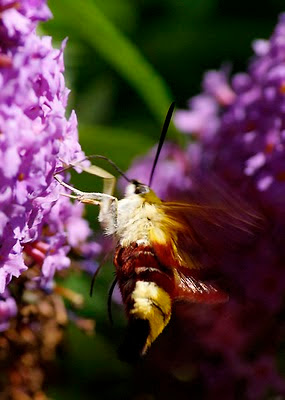 In the evening the moths go to it and we even had a brown Great Green Bush-cricket [Tettigonia viridissima] having a munch on the flowers. 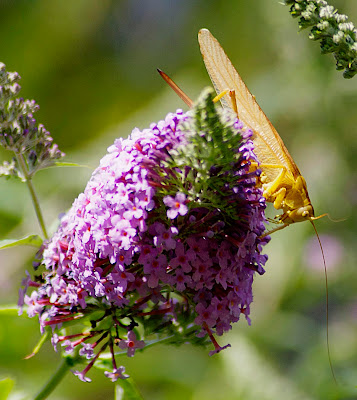 The evening Simon & Susan from Days on the Claise came over we had Small Pincertail [Onychogomphus forcipatus] patrolling a territory on the bief and both the Demoiselles by the bridge.
There were also male Western Spectres [Boyeria irene] patrolling other stretches and a female of the same species hunting under the eaves.
Finally... and quite spectacular... was a very large hoverfly. A very good hornet mimic, I would have dismissed it as such if Susan hadn't pointed it out as Milesia crabroniformis, the largest European hoverfly.
I've put two pictures up of this as one of them gives it scale by showing a Greenbottle [Lucilia caesar]. 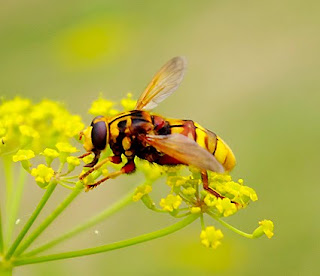 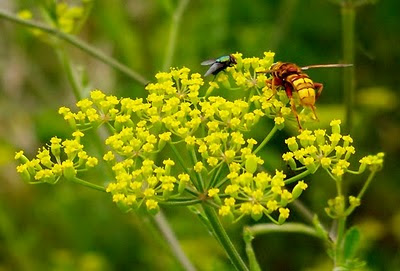