A jynx in the potager

On Saturday morning Tim saw an odd-looking woodpecker perching on one of the posts demarcating our vegetable garden. Brown, with a dark stripe down its back, it kept flying down to the ground to pick up the ants disturbed by our potato harvesting activities. A wryneck!

The English name, and the scientific name jynx torquilla come from its ability to twist its head around to fix potential attackers with a baleful stare. Its French name Torcol fourmilier indicates its diet which is almost exclusively ants. This woodpecker doesn't use its tail to help climb trees, and doesn't make nest holes in trees, preferring to take on existing holes. It is about the size and colour of a young starling, and easy to overlook. The only one we have seen previously was in Majorca, and we only saw that because a lot of birders were watching it already! According to Les Oiseaux de la Claise Tourangelle, the wryneck possibly nests in Le Grand Pressigny.

The purple heron (ardea purpurea, héron purpré) that visited the ditch in the field next door later in the day was just the icing on the cake. It skulked its way along the bottom of the ditch, occasionally lifting its head to look our way to show us the lovely russet markings on its neck. No good photo, alas... but Tim tried some digiphotography using a small compact camera hand-held against the eyepiece of the 'scope. A case of "patting your head and rubbing your stomach" co-ordination [or lack of... thus "dodgyphotography was born!]


Posted by Pollygarter No comments:

When we first saw the millstream, it was clear as crystal and full of fish. We could see trout moving through the water, and Tim saw native crayfish scooting* around. Kingfishers (Acedo atthis, martin pêcheur), flew to and fro, on one occasion taking a detour around the barn before going back to the stream.
Then suddenly, a couple of years ago, the water became cloudy. The waterweed was swamped by clinging grey mud. No more fish, no more crayfish. And no more Kingfishers. According to the River Technician, Yohann Sionneau, a local dairy farm was to blame, and judging by the muck they spread over the road from constant building work, that's very probable.

But since Yohann started work, the millstream has gradually cleared. There's still mud on the bottom, as can be seen if you chuck a pebble in, but the native weed and the fish are coming back. And this month, kingfishers too! The piercing whistle announces the passage of a blue bullet. When defrosting the freezer, Tim took some icefloes to the bridge for disposal (perfectly clean water, just a bit cold). As he dropped the largest over the parapet, he nearly brained a kingfisher flying underneath. This bird was followed by two more - they must have bred close by.

Yesterday we saw a kingfisher perching in the cherry suckers lining the bank outside our window. As usual, no camera to hand. As Tim tiptoed downstairs to get his camera, I watched it dive into the water for a small fish and hurtle back upstream out of sight. So - no pictures then.

Fortunately Tim's brother Nick is an excellent wildlife photographer and has some stunning kingfisher pictures on his Flickr site... like this one! 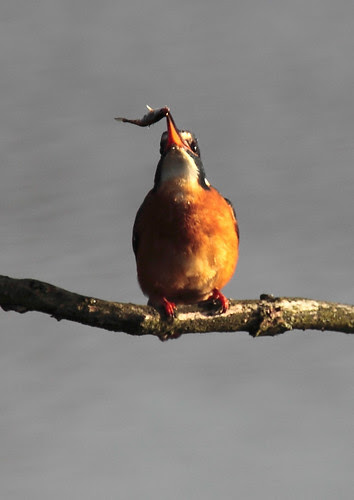 *A native crayfish, once, crawling along the stony bed of the ford!
Posted by Pollygarter No comments: