It's déjà vu all over again. Yesterday I spotted Myrtle the moorhen having a spot of nookie with a gentleman friend. She then drove him away. For the first time since her male went missing her "flags" were showing under her tail, and they continue to show as she puk-puk-puks up and down the millstream once more. She still isn't achieving much but all the signs are she's feeling happier, despite the destruction of her nest.

The tawny owls are repeating their courtship behaviour from the end of February: excited "yik-yik-yik-yik" calling by the female in the hangar on Wednesday night, with a softly hooted response from the male and a gruff intervention by another female, then the "huia" call from her and trilling from him on Thursday, which we recorded. The timescale seems somewhat telescoped, but this time the pair are not strangers to one another, not to mention that there is not much of the breeding season left. The trail camera has arrived, and we are going to see what we can see tonight.

Tawny owls do not have two broods in a year unless they lose the first one. The timing is just about right for a second brood, and going on Baron's hunting success there is an excellent supply of voles. Another possibility is that work at Moulin de Chevarnay may have destroyed the nest. The huge evergreen hedge (too fine for leylandii, I think they are thuyas} has been cut down from about five metres to one metre a couple of weeks ago. All the machinery for digging a fosse septique was there plus lorries taking away the spoil. The noise and people will have disrupted quite a few nesting birds. At least our view is enhanced by the distant roofs and weeping willow that we couldn't see before.

We have one newcomer to report - a roe buck Chevreuil européen (Capreolus capreolus). Tim spotted him yesterday lying in one of the mowed areas of the meadow. Today we both saw him under the nearest of the big old willows, or rather under a network of new growth projecting from an old fallen branch that remained connected to the tree. His antlers still have velvet on them, and he's scraped some of it off since yesterday. He's obviously found this to be an ideal spot to rest, scrape his antlers, feed and shelter from the rain.

Just as long as you stay out of the vegetable garden, matey. And the orchard. You don't know how good you taste.
Posted by Pollygarter 2 comments:

The flag iris have reappeared as the waters of the bief begin to fall. The plant is flattened by the force of the flow and it's impossible to tell at this stage whether it will spring back up or stay like that. There is little sign of the moorhen's nest.


However Myrtle has been through to check. She mooched about on the iris, pulling at a leaf here and there, then had a good groom and swam away.

We've just had 55 millimetres of rain in the past 24 hours. The bief has risen by 15 centimetres. 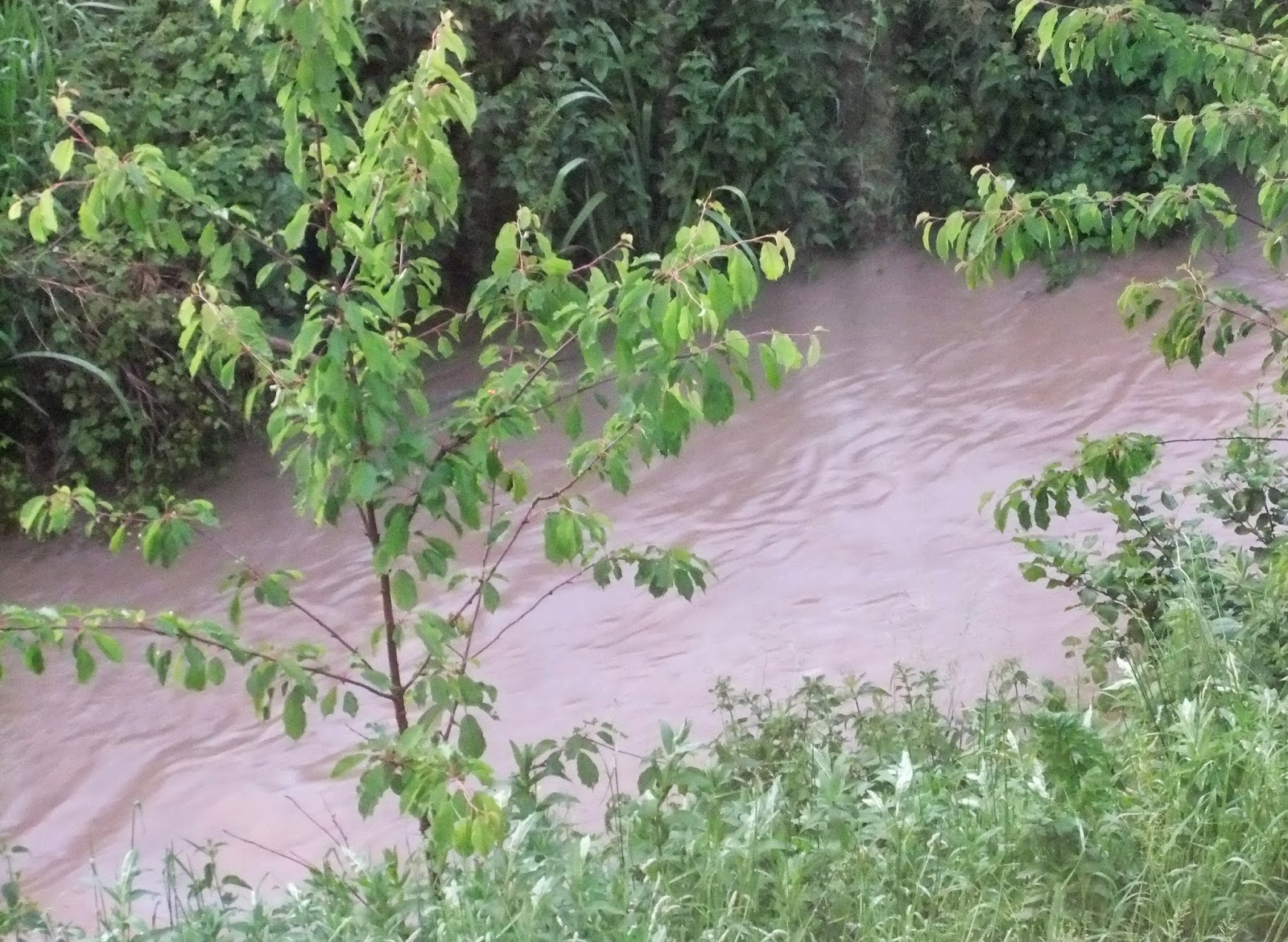 This morning, after 16 hours and 32mm of steady rain, the moorhen's nest in the millstream beneath our window was awash. This was clearly a situation on Myrtle's mental chart of things she could deal with, and she went straight into action. Normally a pair would work together to reinforce a nest, but one bird on her own can still do the job. 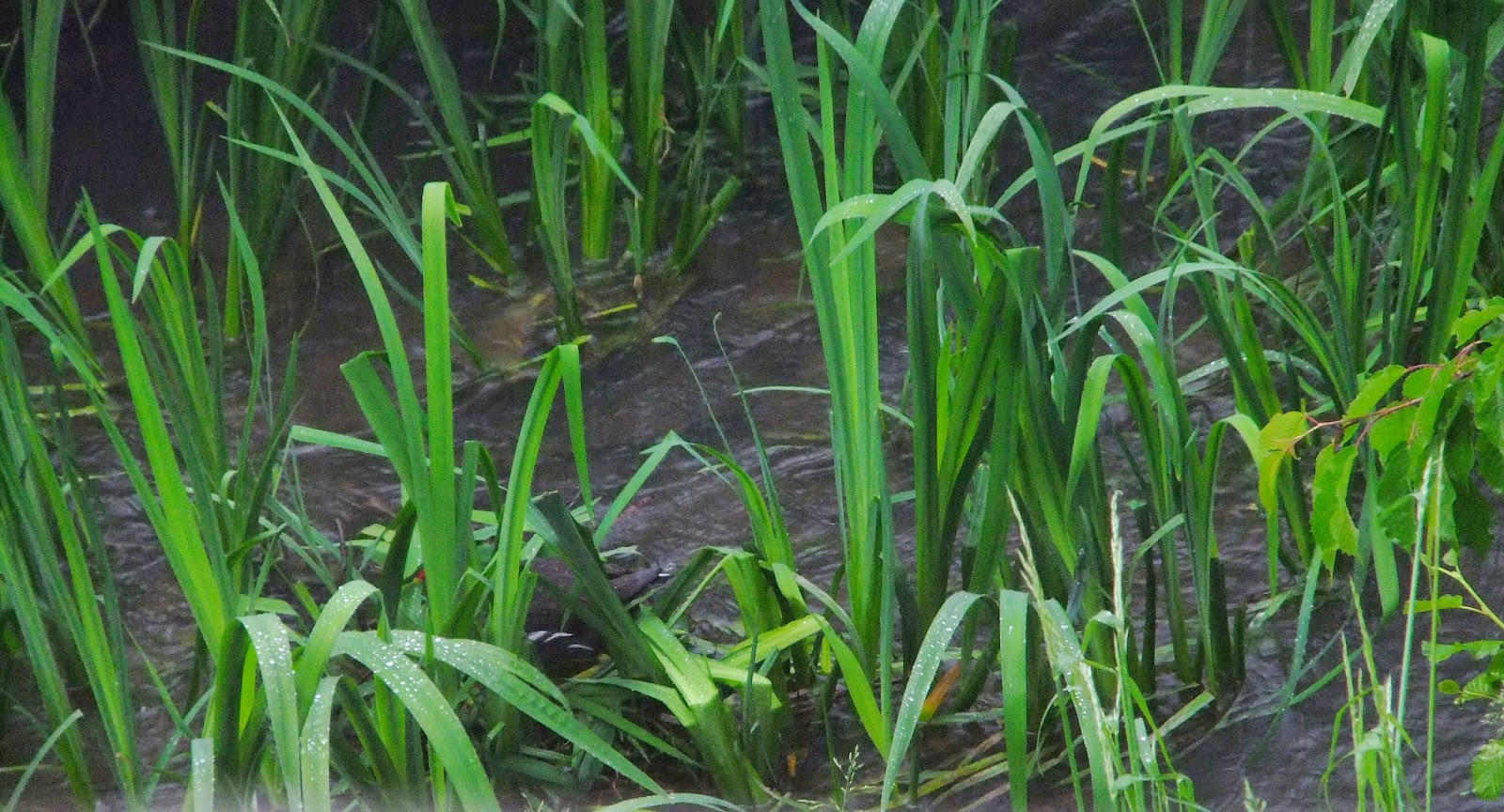 She pulled iris leaves to pieces and dragged them to the nest. Any suitable piece of leaf or twig in the vicinity was called into service and she swam to and fro collecting them. Each piece was inserted and woven in with care. She even bent over whole iris shoots. 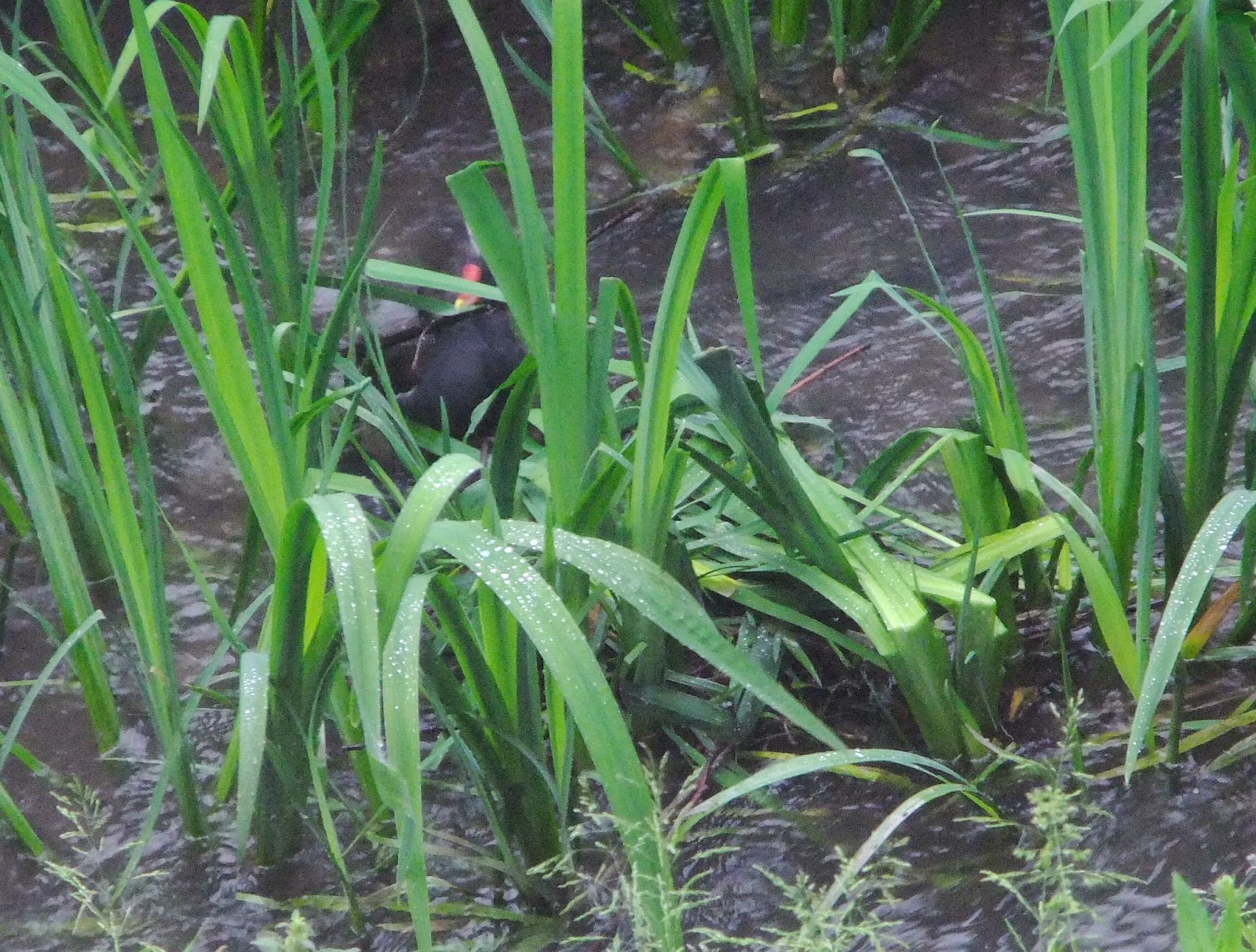 After half an hour's work, the platform was well out of the water. 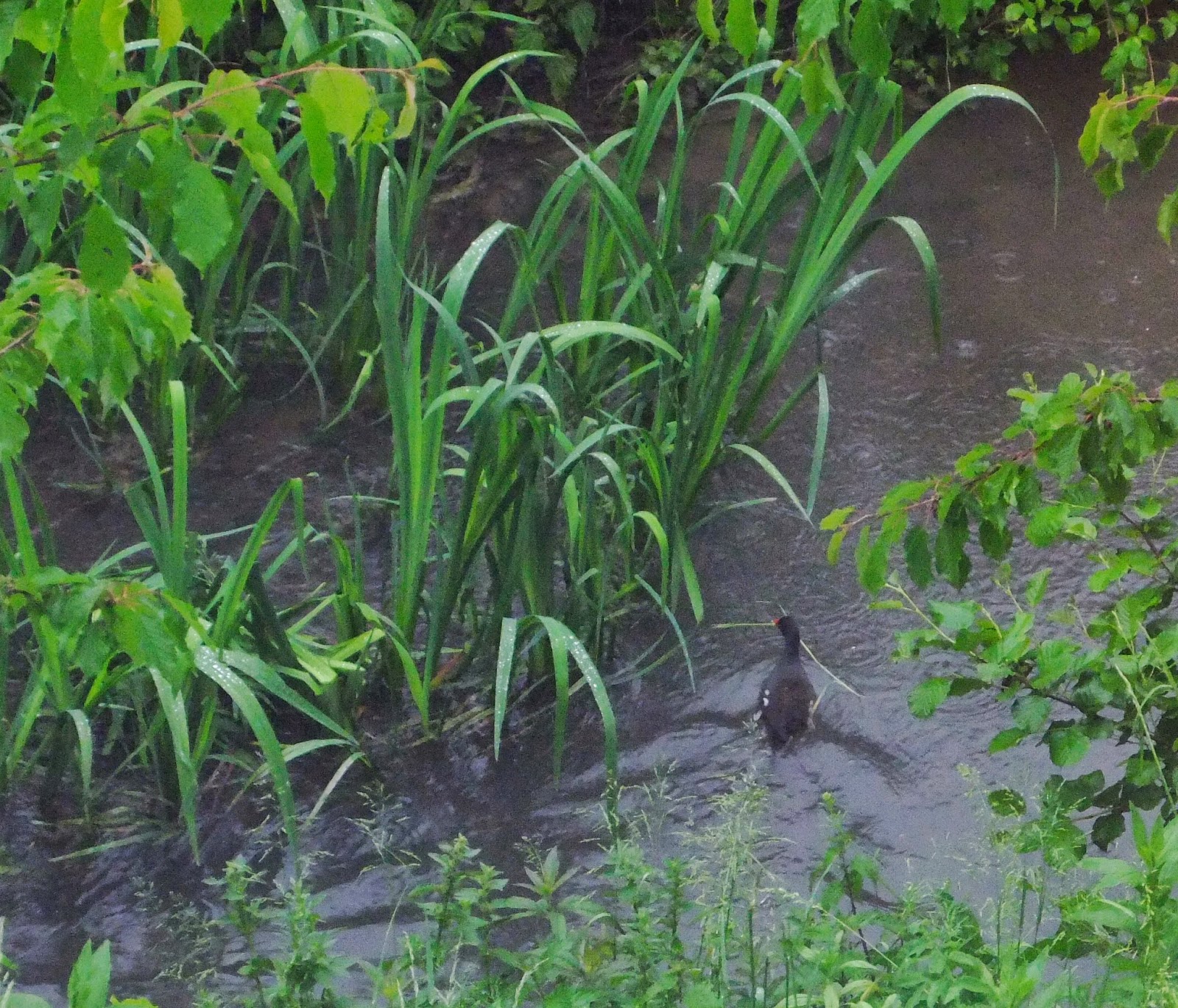 And then she went away again.
Posted by Pollygarter No comments:

As I was a-walking across the back lawn to the cold frame on Tuesday, carrying a tray of seedlings I had just pricked out, a baby wren landed on my thumb. 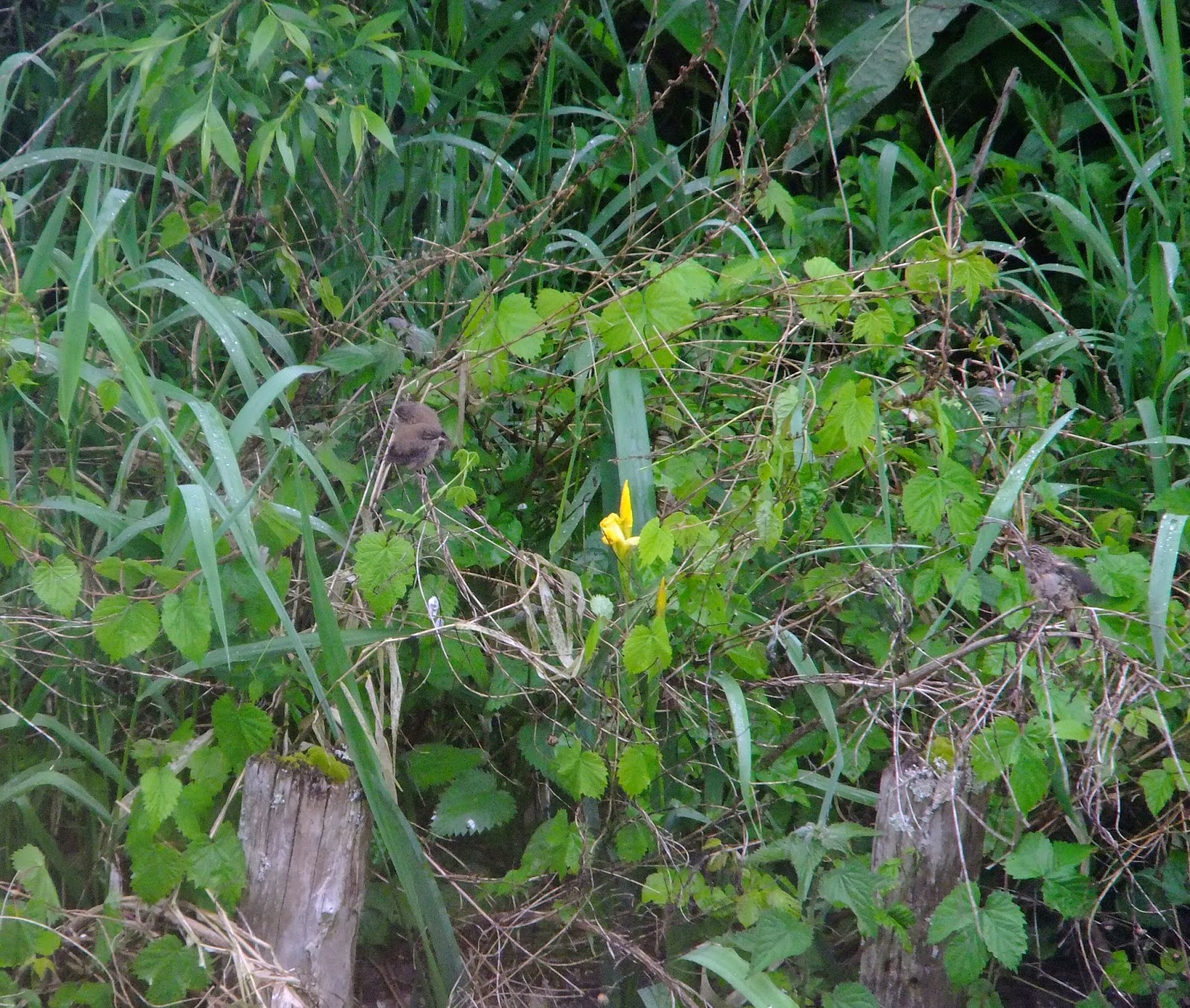 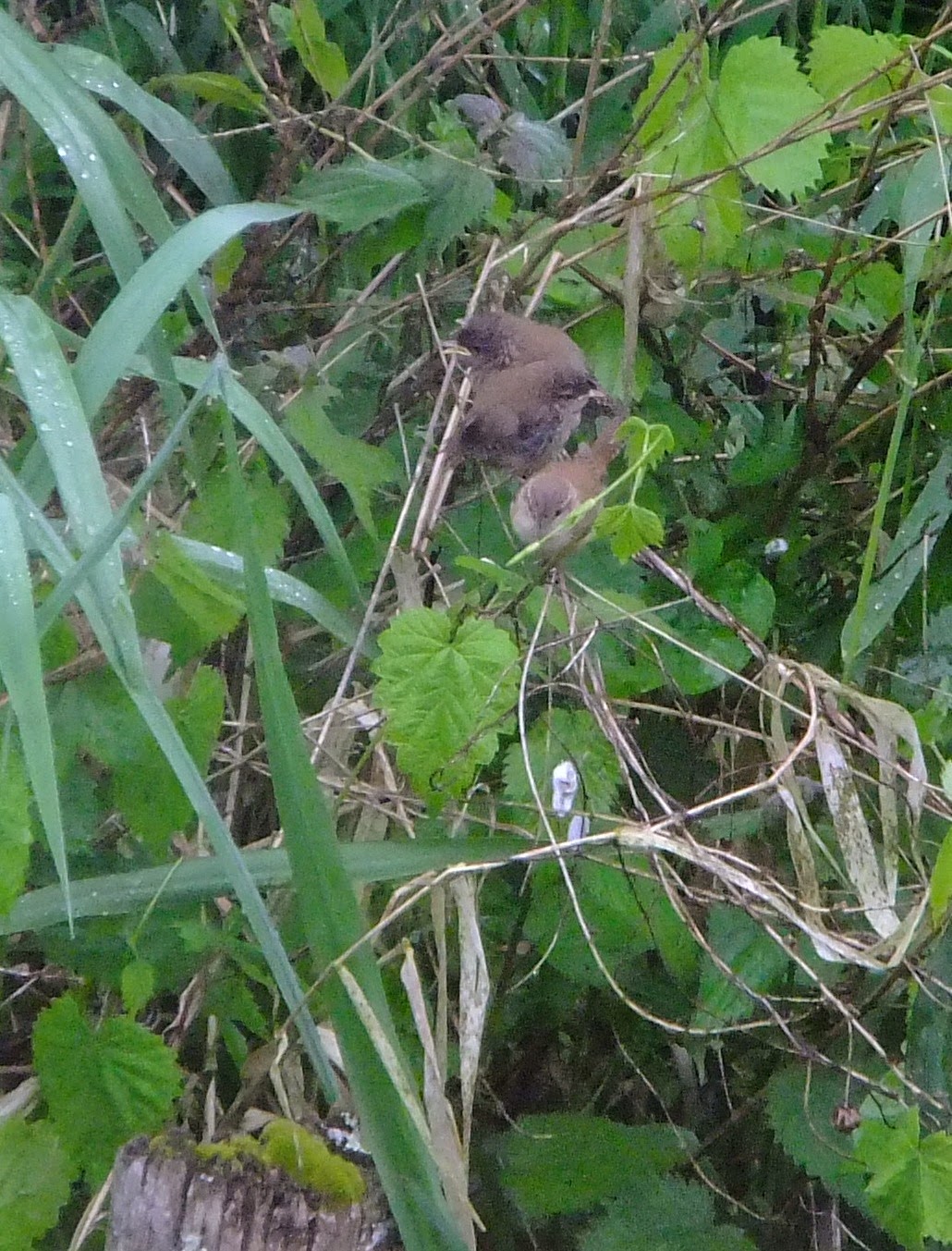 Email ThisBlogThis!Share to TwitterShare to FacebookShare to Pinterest
Labels: wren

On Monday evening the blackbirds were kicking up their usual racket but it seemed to go on for longer than normal, so I looked out of the window to see what was happening. Two white wagtails motacilla alba bergeronnette grise were dashing to and fro also kicking up a racket. Something dangerous was around, something that threatened their chicks.


Then, like a pantomime villain, a heron silently stalked into view from beneath the bridge, its eyes fixed on something above and in front of it - the horizontal post projecting over the millstream that we call the kingfisher trap. What it wanted was on there, obscured from my view by the little cherry tree - a wagtail chick.


The adult wagtails were flitting around the kingfisher trap, squeaking in agitation. The heron was coming closer. Suddenly the chick decided that it would be safer back in the nest than where it was. It shot past the heron aiming under the bridge. The heron swivelled and stabbed...

That's how it feels, anyway. Since 10th March, at  first light we have watched the mallard duck escorted to her front doorstep by her drake, bathe herself, snatch a bite to eat, and make her way up the bank of the millstream to slip beneath a screen of overhanging brambles. We first saw the pair inspecting the site on 7th March. We have seen her come out on a couple of occasions, and going up at different times of the day, but her favourite break time away from her nest is sunrise. These pictures were taken on 28th April at 6:53.


This morning we glimpsed her shepherding at least five ducklings along the edge of the water, shielding them with her body. And where was her husband during all this activity? Down the pub as usual, like as not.
Posted by Pollygarter 4 comments:

Email ThisBlogThis!Share to TwitterShare to FacebookShare to Pinterest
Labels: Mallard

It was all going so well... the lovely new home, in a popular location well worth fighting for...

...And then everything changed.

By 28th April, we had realised that we were seeing only the female moorhen, and only occasionally, at that. The male has disappeared.


The female swims past from time to time, in silence. No more quiet "Puk-Puk-Puk" contact calls, she is totally alone. She pulls at an iris leaf, or flicks a bit of twig onto the nest, but with no great purpose. She seems bereft, with no idea what she is meant to do. Her instincts cannot cope with this situation.

We have no idea what has happened to the male. Possibly the big dog fox I saw at the weekend got him, or a pike in the deeper stretch of the bief by the walnut tree. Or maybe the mallard drake killed him - the mallards' nest on the bank is only a couple of metres away, and he is very aggressive with other drakes. To be continued - maybe.
Posted by Pollygarter 5 comments: