Observations from the Nature Diary 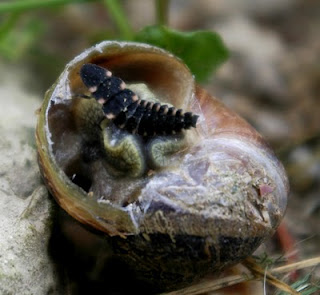 We get the males on the window since we put the pale green curtains there [a touch of bigger is better might be the reason why... as in "Cor! Look at the lights on her!!]
[Shown right is a glow-worm larva on a snail  >>>] 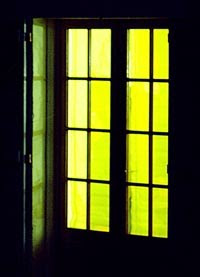 <<< These are the curtains


27th
Went to Chaumussay for their "foulées" [track events / mini marathon] and vide-grenier - Pauline heard bee-eaters when we got an Orangina to drink.
As we left around lunch we went the Etableau route and heard and saw them again near the Croix Jourdain [on the 1:25000 Grand Pressigny map 1925O] by the railway crossing.
Back to La Forge for bino's, 'scopes, etc. and headed back.
Less than 0.75K from the house, near Gatault, in "OUR" valley - a flock of about 50 to 60 feeding over a field of tares [or similar vetch-type plant] on the bees, butterflies and grasshoppers. Superb views of aerial manouvres [wheeling, gliding and stooping] with the trill calls going all the time... and of them settled in the top of a nearby tree [just out of telephoto range!!] - fab views through the 'scopes though.
This was followed by the passage of three eagles over the valley [probably Booted, going on the jizz]
Posted by Tim