The Étangs Foucault -- A grand day out... part the third

The first things we saw as we approached Étang Foucault were more Grand Aigrettes...
just how many of them are there in this area?
Mind you, we aren't too unhappy about seeing them... all the Heron family are magnificent birds...
a good second in my mind to the Raptors.... there is just something about their body language.
Tall... slow... proud...

We parked and strolled gently towards the hide... more white birds off to the right...
but two of these turned out to be mute swans... increasing our bird count by another species.
We entered an empty hide... it was lunchtime, after all!
In truth, there had been people there just moments before... they were just leaving the hide as we pulled in...
and were down by their car by the time we'd started getting things out of the back of ours.

The hide at the étangs.... there are four of them.... actually looks out over the Étang Barineau...
with part of the Étang Foucault barely visible through the window at the left end.
This end window also looks directly at a large tree beside the hide...
a good spot for watching warblers, flycatchers and other small birds.
A third étang is visible directly ahead through vegetation that is rapidly gaining height!!

We made ourselves comfortable, scanning the area through the binos [jumelles] with the Mighty Midget 'scope out on the shelf with the guide. We have two large telescopes [long-vue] as well, one each for serious birdwatching... but the MM52 is very compact and handy on a 'troll' around such as this.
There was a lot more activity than we'd previously seen here...
but again, that might be down to the time of day...
we were much earlier than usual!

Out on the water were Great-Crested Grebes, Mallard, Tufted Duck, Shoveller and Cormorants... two of the latter being in full breeding plumage.One so much so that I had to look it up, in the guide, as it looked very odd.
The male Cormorant [latin]French gets a stripey head in breeding colours...
usually a darkish blue-grey stripe... and there was one on a post that answered this description...
the other one looked almost as though the patterning on a Great-Crested Grebe's chick had been super-imposed on the head and neck... the grey was almost white...
but all this was happening too far away to take pictures.

Then, much closer, right outside the hide in fact, a Grand Aigrette came to fish...
it stalks much the same as the Grey or Purple Herons do... very slowly, very carefully.
These pictures show what we saw...


That last picture is cropped from a much bigger view... the egret was on the far side of the étang.... I've put it here because it shows the beautiful curve of the wing tips... unlike the "fingers" formed by a Heron's primaries.
I turned to watch a heron, which was fishing in the deeper water... it was definitely stalking something.
But I was distracted by the movement of something flying to my right...
a Hen Harrier [Circus cyaneus] Busard St.Martin. 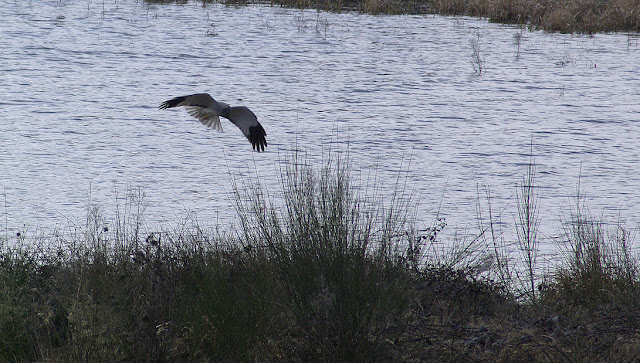 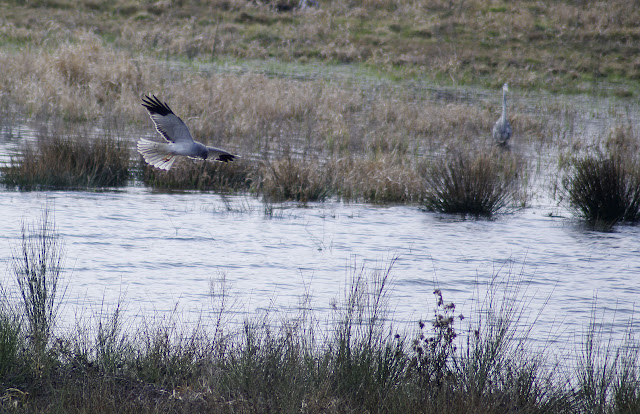 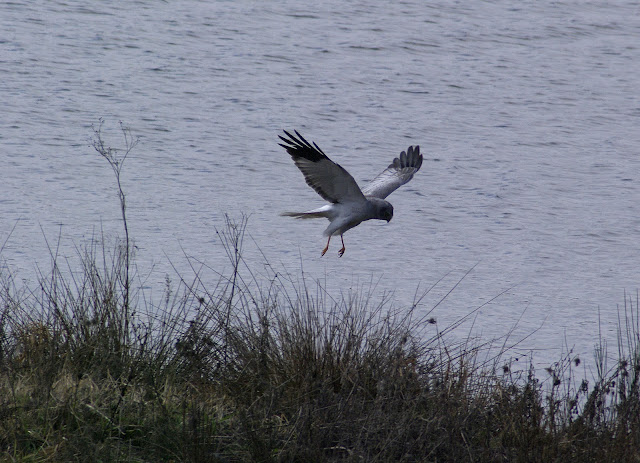 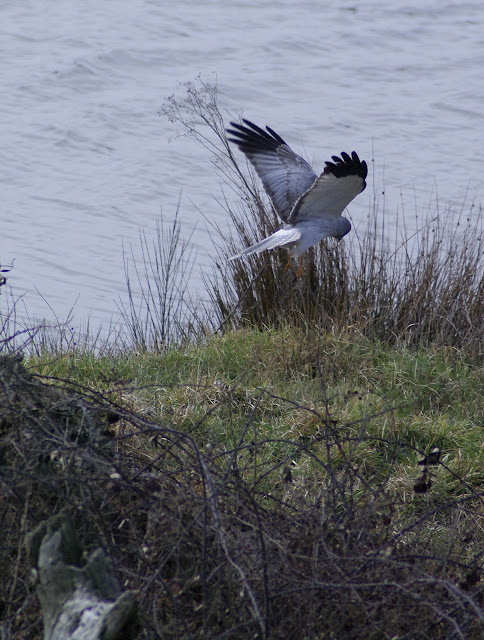 It then "hovered" in the wind... slowly passing in front of us... until a couple walked into the hide and stuck their heads out of the hide window!!... and it was off... wheeling away back towards where I first saw it.... where it continued to hunt, over the headland.

Our attention was then caught by a pair of Great-Crested Grebes..... but you will have to wait for that... and for more news of the fishing heron.
Posted by Tim

Fantastic photos, I love all the birds of prey. Diane

Yes... even the Common Buzzard has a certain sort of majesty when perched upright.

I have an answer to the number of Great White Egrets [second line]... the new walks book answered it... about 400 can be seen roosting at the Étang du Blizon during the winter.

Beautiful photos, lovely to see them, thank you.